Rust on an Embedded Device

Similar to other programming languages development for embedded devices in Rust differs from computers. In Rust, it is mainly the lack of standard library support. This section covers a few highlights from the development process.

To get familiar with Rust in a real-world embedded environment I chose to write a sensor fusion program, estimating the orientation from a gyroscope and an accelerometer. The platform in the figure is based on a NUCLEO-F446RE from ST featuring an ARM Cortex-M4F MCU and X-NUCLEO-IKS01A3 sensor shield from ST as well. The shield contains a 3D accelerometer plus gyroscope sensor (LSM6DSO), an additional 3D accelerometer (LIS2MDL), a 3D magnetometer (LIS2DW12), a pressure sensor (LPS22HH), a humidity and temperature sensor (HTS221) and another temperature sensor (STTS751). 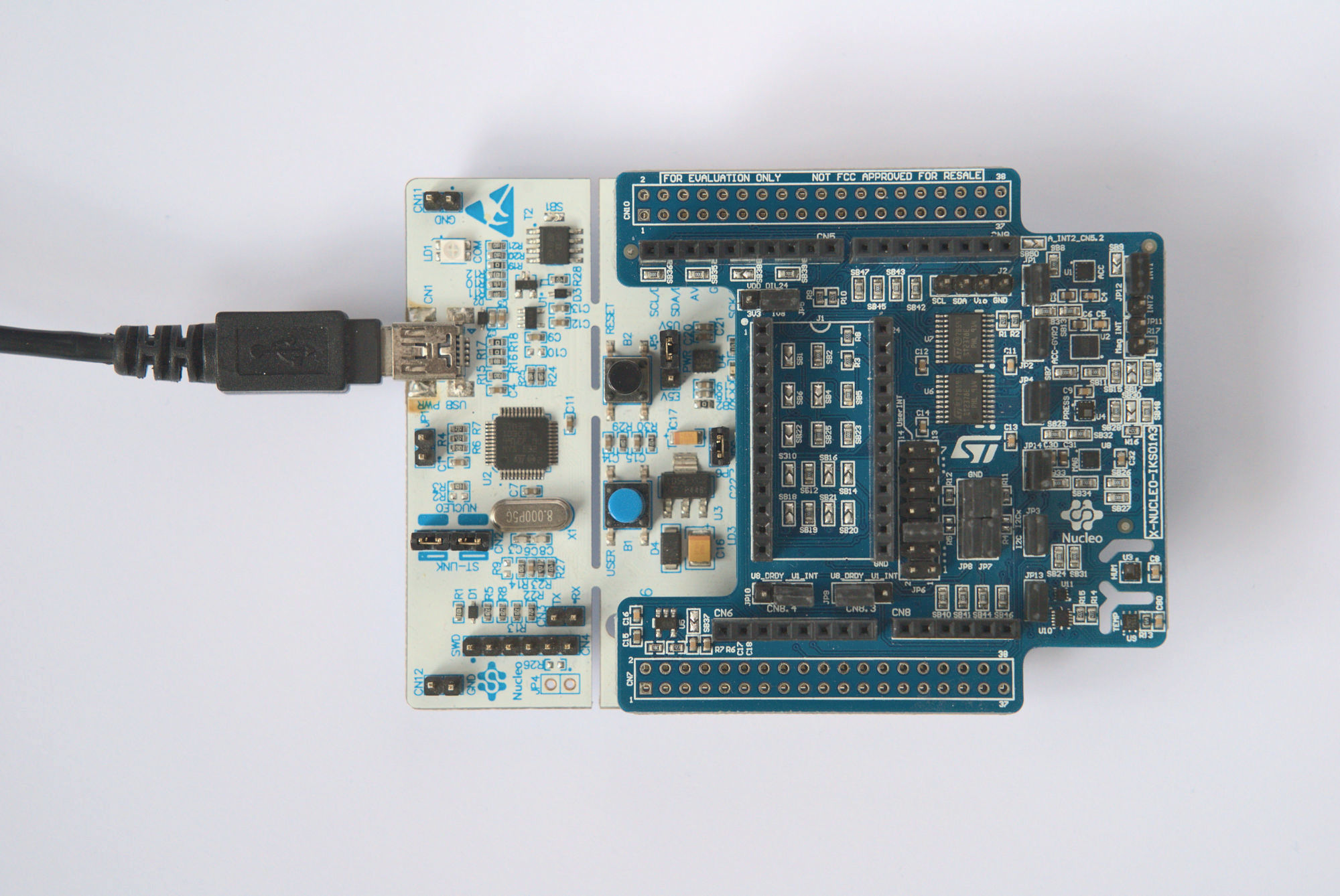 The demo application reads the current acceleration and angular velocity over an I²C bus. It then updates the estimate of the orientation using sensor fusion and prints the result to a serial output (UART) in JSON format. That covers the aspects of typical embedded application:

We also need to somehow check whether the orientation the embedded application outputs makes sense. For that purpose I wrote a Python script, that plots the current 3D orientation and the measurements from the accelerometer and gyroscope. The plots of an example run are shown in the figure.

The Rust source code for the embedded application is available at [6] and the Python script for the visualization at [5].

All microcontroller manufacturers provide a hardware abstraction layer (HAL) library to access peripherals without dealing with memory mapped registers. The API for the HAL may vary depending on the manufacturer, though there is some conses that most are written in C and for ARM Cortex CPU core they are compliant with the CMSIS interface. In contrast, HALs in Rust are community driven. The API for a HAL is defined in the embedded-hal crate as traits. They are then implemented for the different microcontrollers, like the stm32f4xx-hal crate. This implies two things: [15]

As the HAL development is community driven, it will in some cases not have all the features you need. Another drawback is that even the embedded-hal has not reached a stable release yet. The API of a HAL is thus subject to change. Nevertheless, a unified HAL API is compelling, writing platform agnostic device drivers was never easier.

The Rust community has implemented the HAL differently from a typical manufacturer HAL. We will now look at some differences.

Listing: Configuring an I²C interface with the embedded-hal

At in the listing the stark difference between Rusts ownership and C is evident. In C we can access peripherals in a static context from anywhere, in Rust we take the peripherals and that can only be done once. The embedded-hal uses strong typed values as seen at so that compiler can already check for mistakes. Configuring peripherals in a C vendor HAL is done with a configuration struct passed to a function. The embedded-hal tends to use multiple functions instead . The advantage being that only valid configurations are available and checked at compile time. A common pitfall with C vendor HALs are clock trees that the user has to configure. As demonstrated in the clock tree is passed to the HAL, which applies the correct configuration on its own.

There is no driver for any of the sensors on the sensor shield X-NUCLEO-IKS01A3 on crates.io. Thus, support for a few sensors was added based on the existing lis3dh crate. Because with the embedded-hal, every peripheral has its own type a driver that uses a peripheral must be generic.

the listing contains a simplified extract of the LSM6DSO (accelerometer and gyroscope sensor) driver. First off, the data is defined in a struct (Lsm6dso). Similar to C++ template programming, <I2C> holds the generic type of the I²C interface. The generic type is then used to define i2c in the data structure .

The implementation of Lsm6dso again declares a generic type , which is used specify the struct type . The problem with the generic type I2C is that we are missing the methods to write to the bus. The solution is to declare that the specific type for I2C must implement the WriteRead and Write traits from the embedded-hal . The type of I2C is inferred by the compiler by the new() function call.

Most peripherals, such as GPIOs are only accessed by one software module, with clear ownership of the peripheral. Buses such as SPI or I²C are often accessed from multiple device drivers. But Rusts ownership allows only for one owner. This problem has already been solved by Rust community with the shared-bus crate.

the listing shows how to share one single I²C bus between two sensor drivers and . The shared-bus crate contains a mutex to ensure access to the bus is thread/interrupt-safe.

Multitasking with the RTIC Framework

Real-Time Interrupt-driven Concurrency (RTIC) is a framework that uses interrupt handlers to offload context switches to the hardware. This is an implementation of the Real-Time for the masses (RTFM) [16] concept. The Rust implementation also features compile time guaranteed deadlock free execution and minimal scheduling overhead.

The RTIC framework heavily uses Rust attributes like #[rtic::app(...)] to generate code that handles concurrency. As an example, we will look at the adaptation of the demo application to RTIC.

On the first line of the listing a tool attribute denotes that an RTIC application follows. We need to specify which microcontroller is used. The device is later accessible through the task context. Resources that can be used from multiple tasks must be put in the Resources struct .

Code for initialization has its own attribute . Within the attribute we must tell the framework if we want to schedule any tasks, i.e. sense_orientation(). The task is scheduled explicitly at . In the last step of the init() function we fill the resource struct defined at .

The sense_orientation() function has the task attribute as well as the resources it will use. The schedule attribute is necessary, so the task can reschedule itself and run periodically. Within the task resources are accessed through the context .